Thousands of new homes on track as part of rail regeneration 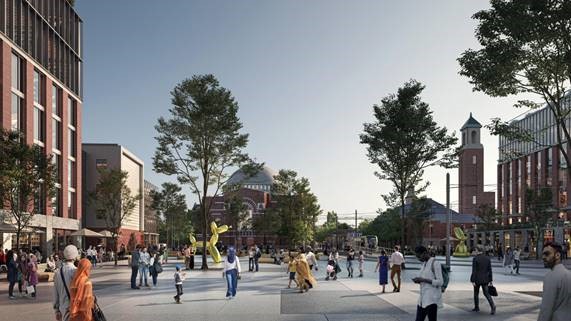 An ambitious plan to create over 7,000 new homes and 250,000 square metres of employment space along the Calder Valley rail corridor has been unveiled by Rochdale Borough Council.

The masterplan proposes major redevelopment around the borough’s five railway stations; Rochdale, Castleton, Smithy Bridge, Littleborough and Mills Hill, as the council gets the borough ready for its next phase of regeneration.

The plans, which were drawn up with urban planners Broadway Malyan and WSP, will prioritise the creation of new neighbourhoods on underused brownfield sites, which are
close to local amenities and transport links.

The work is being delivered in collaboration with the newly formed Greater Manchester Station Alliance, a partnership of Network Rail, Northern Rail, Transport for Greater Manchester, regeneration specialists, LCR and the GM Combined Authority.

The Alliance is working in partnership with local councils to spearhead regeneration opportunities around rail stations, investing in key facilities and boosting economic growth. Rochdale will be the first GM Borough to benefit from the new partnership.

With 2.7m journeys made from Rochdale’s railway stations last year, the council sees them as prime sites for economic development as part of the borough’s continued economic transformation.

Councillor John Blundell, cabinet member for economy, business and skills at Rochdale Borough Council, said: “The land around our railway stations has huge potential for regeneration because you’re putting people close to the transport connections and local facilities that you need to create sustainable neighbourhoods.

“Rochdale’s incredible connectivity, with five railway stations, and a sixth on the cards, puts us in unrivalled position to repurpose brownfield sites along the Calder valley corridor to unlock thousands of new homes which are a stone’s throw from Manchester city centre, for a fraction of the price.”

Major proposals being worked up include:

The plans will also include development around a potential sixth railway station in the borough, which is proposed for Slattocks in Middleton as part of TfGM’s 2040 transport strategy.

James Howard, Development Manager for LCR, said: “These proposals, which will deliver significant new housing and commercial development in Rochdale, demonstrate the art of the possible for the Alliance in just one corner of Greater Manchester. Through targeted investment and collaboration across the public and private sectors, there are many further regeneration opportunities we can unlock to support new homes, jobs and public value in town centres across the city region.”

Richard Jones, Development Planning Director at WSP, said: “This strategy highlights the opportunity that exists along this key corridor with the potential for over 7,000 new homes and a significant number of jobs which could attract over 16,000 new residents to the area.

“In line with the climate emergency declaration and the focus on achieving net zero carbon within Greater Manchester, the development opportunities provide sustainable, easily accessible locations for future growth and will help contribute to a reduction in emissions by reducing the need to travel by car.”

More detailed masterplanning work and feasibility studies will be taking place in the coming months, with construction of the first new homes identified in the strategy set to begin as early as next year.