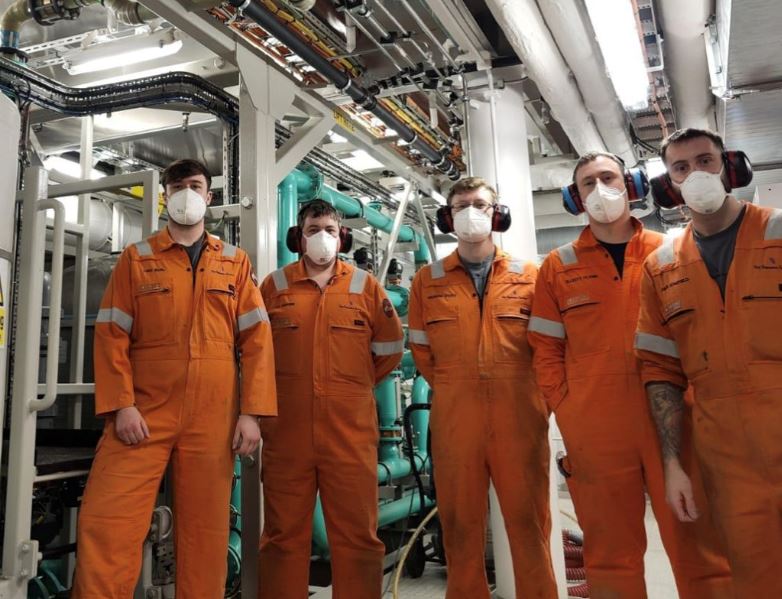 A team of Rochdale engineers is finally home after completing the most challenging job in their company’s 31-year history.

The group from Salt Separation Services flew off to Germany on February 19 to carry out checks on three reverse osmosis (RO) desalination plants that they’d manufactured for a new cruise ship.

The machines had been installed by German shipbuilder Meyer Werft and are 13 metres long, weigh 20 tonnes and can each turn sea water into 800,000 litres of drinking water every day.

The tests would normally take up to 10 days to complete but because of Covid restrictions the team were away for 38 days and underwent a combined total of 130 Covid tests – all of which were negative.

Daniel Shackleton, technical and commercial director at Salt Separation Services, said: “We were founded in 1990 and have never walked away from a job yet and don’t intend doing so.

“However, because of the logistics, isolation and quarantine involved this was our most challenging job yet. The guys did a brilliant job and were ably supported by our back office staff.”

Mr Shackleton explained: “Without Covid we would have sent the guys in a van to Hull. From there they would have caught a ferry to Rotterdam and driven to Meyer Werft’s shipyard in Papenburg.

“They weren’t allowed to fly direct to Germany because the country’s in a Covid lockdown so instead they flew to Luxembourg and were driven to Papenburg – where they each had to spend 14 days in hotel quarantine.”

Mr Schofield, who has worked for Salt Separation Services for nine years, said: “14 days is a long time. You have a lot of time to think. My room was about six metres by eight metres and I set myself a target of jogging a half marathon one day and walking the length of a marathon another during quarantine.

“At the end of the quarantine period we underwent the mandatory Covid tests and were driven to the port at Bremerhaven where the boat was leaving for sea trials. Needless to say we wore PPE throughout.

“After another Covid test we were allowed on-board and ran a series of tests on the RO plants and installed a total of 270 membranes which is an essential element in the RO process.

“In total we spent 10 days onboard during the sea trials and slept on the cruise ship throughout. If we weren’t working we were in our individual cabins where our food was delivered.”

The tests were finished on Wednesday March 24 but there was more drama when the group tried to fly home.

Mr Schofield, a father of two young children, said: “We caught a flight to Munich from Bremen where all our documentation was checked including our new PCR Covid test certification however when we went to board the plane to Manchester we were told we had the wrong Covid test and were refused entry on the flight. It was devastating.

“We had another test and were booked on a flight on Sunday March 28 but were terrified that Germany was about to go into the red zone.

“Thankfully we were able to board our plane to London, where we hired a couple of cars and drove back to Rochdale. I walked through my front door at just after midnight in the early hours on March 29.

“In total I clocked up 38 days, underwent 26 Covid tests, stayed in four hotels and on one cruise ship. I even had my 34th birthday while I was away. It wasn’t your typical trip but our customer needed us.”

Mr Shackleton said: “The guys have now got to self-isolate back in Rochdale for at least another five days, subject to test results. I’m really proud of them and everyone else at Salt Separation Services.”