Rochdale’s economic development agency has delivered a record-breaking year that has triggered a £500m investment boost to the local economy.

Working with the Council, Rochdale Development Agency (RDA) secured £80m in successful funding applications in the last 12 months, with highlights including £23.6m from the government’s Towns Fund and £17.1m from the Future High Streets Fund.

Cllr John Blundell, cabinet member for Economy and Communications at Rochdale Borough Council and RDA board member, said the £80m will leverage additional investment worth half-a-billion pounds to the local economy.

He said developments like Upperbanks; Junction 19 on the M62 at Heywood; and the planned Advanced Machinery & Productivity Institute (AMPI), were attracting attention UK-wide.

“The projects we’re involved in, and the calibre of the partners we’re working with to deliver them, show that Rochdale is a place that’s attracting serious investment and serious attention,” he said.

Upperbanks, which includes a hotel and residential development, is being delivered by the RDA on behalf of the Council, in partnership with Genr8 Developments and Kajima.

The project is part of the wider regeneration of Rochdale Riverside, which has already attracted major names in retail and leisure like Next, H&M, Reel Cinema and the Puttstars mini golf complex.

The start of Upperbanks follows the announcement that Manchester-based developer Capital & Centric will be delivering their new housing concept ‘Neighbourhood’ in the town centre.

Neighbourhood Rochdale includes over 200 town centre homes for rent, including a mix of modern, spacious and low carbon homes. It will also include a linear park, running track, gym and community hub alongside community space such as café-bars and delis.

Willmott Dixon is the main contractor for both Upperbanks and Neighbourhood Rochdale. Last year construction contractor John Sisk and Son Ltd were appointed by the RDA to build the new 2.2km link road from junction 19 of the M62 motorway across to Pilsworth Road, in a major step forward for the regional regeneration scheme.

The link road will be the catalyst for 1,000 homes and more than 1.5m sq ft of employment space at South Heywood and is being delivered in conjunction with developer Russell Homes.

Cllr Blundell predicted the planned Advanced Machinery & Productivity Institute (AMPI) will be a ‘game-changer’ for Rochdale after being awarded £23.6m from the government’s Towns Fund. 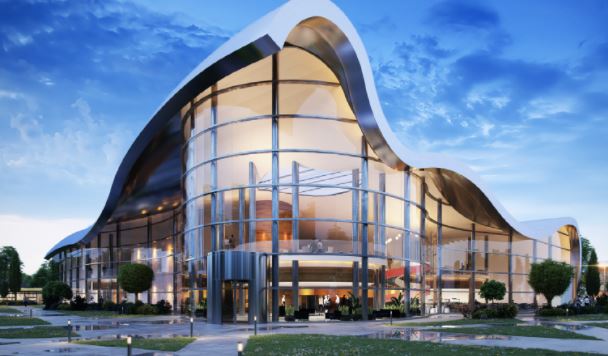 He said: “Rochdale is an area that gets things done but doesn’t rest on its laurels. We opened Rochdale Riverside in April 2020 during the pandemic and we haven’t stopped.”

In total the £500m investment windfall is predicted to deliver 1,500 new homes; 2.2 million sq ft of commercial floor space; and 3,580 new jobs for in the next three years.

The chairman of the RDA, economist Paul Ormerod, said; “The scale of the investment and the size of the projects the RDA are delivering will transform the economy of Rochdale providing high quality homes and well paid jobs for local people.

“AMPI will be a world class manufacturing research facility which will bring academic institutions and government bodies to the borough.” The RDA is leading on the AMPI project and is working with the National Physical Laboratory, PTG Holroyd and several universities including Huddersfield, Salford and Manchester. Further funding announcements are expected for AMPI in the next few months.