Manufacturer pledges to be carbon neutral by 2022 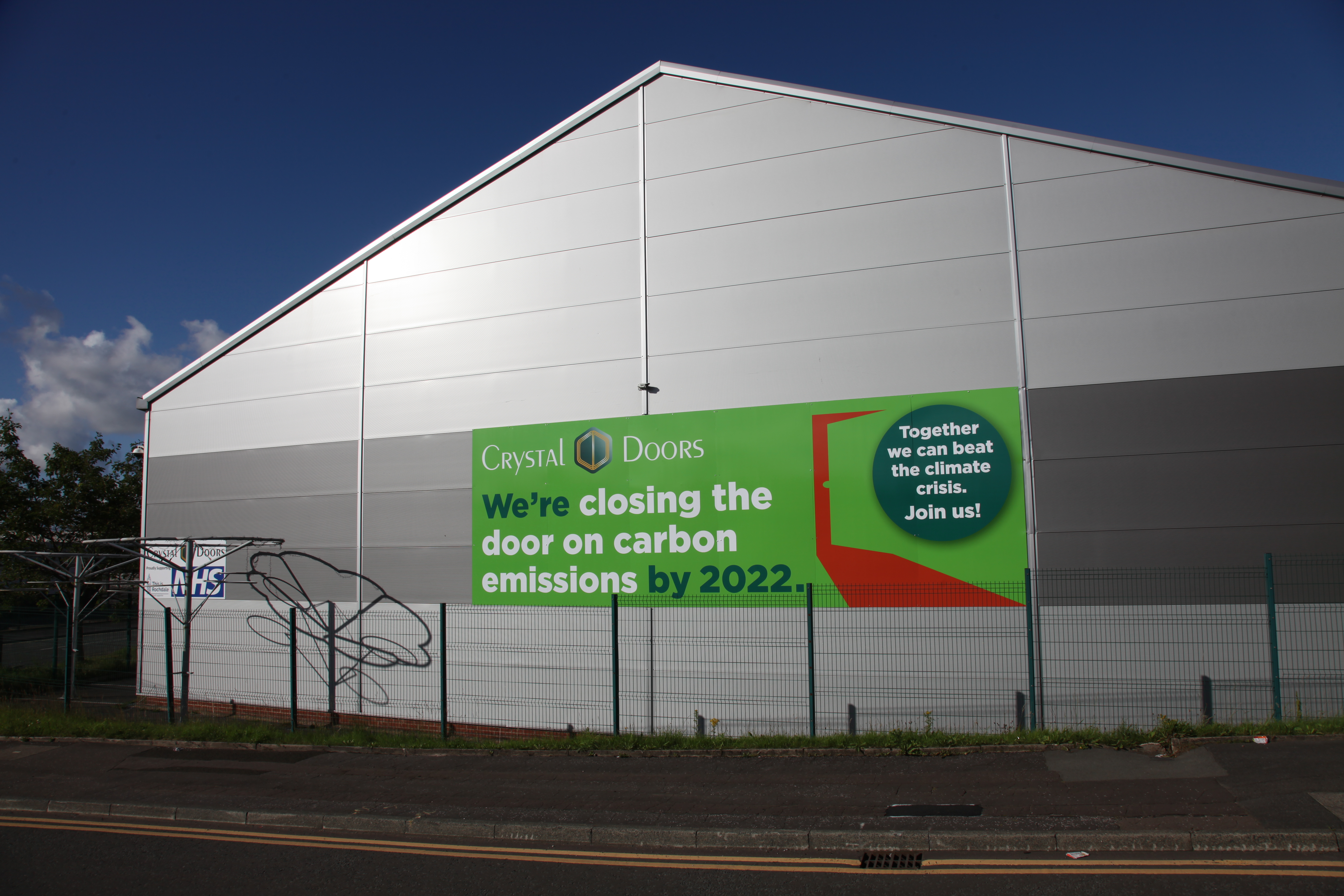 A Rochdale manufacturer has announced plans to be carbon neutral by 2022 – 28 years ahead of the Government’s target of 2050.

Crystal Doors is so committed to becoming one of the first businesses in Greater Manchester to be carbon neutral it has unfurled a 9m x 3m sign on the side of its factory declaring: ‘We’re closing the door on carbon emissions by 2022.’

As part of the pledge managing director Richard Hagan said the manufacturer of vinyl-wrapped doors would completely eradicate the climate impact of its direct operations, staff and supply chain within 18 months – making it one of the most radical green manufacturers in the UK.

By the start of next year, the remaining power Crystal Doors needs to draw from the grid will be from 100 per cent renewable sources. To eliminate ‘indirect’ emissions from the supply chain and achieve full carbon neutrality by 2022, suppliers and customers will be encouraged to make their own improvements, and the remaining carbon footprint will be offset through local initiatives such as tree planting.

The company has also trained its staff in carbon literacy and has offset the carbon footprint of every employee, giving a cash reward to those who can demonstrate a lower climate impact each year.

Mr Hagan said: “We’re putting the climate emergency at the heart of what we do as a business, not because it’s good for profit, but because it’s the right thing to do. I strongly believe those with the ability to lead the way must do so, which is why we’re telling the world about our plan and, crucially, sharing our knowledge on how we’re doing it.

“Our new sign is visible to everyone who travels in and out of the estate so we hope it will start a conversation about how we can all reduce our impact on the environment.”

Andy Burnham, the Mayor of Greater Manchester, has announced his ambition for his region to be carbon-neutral by 2038, 12 years’ ahead of the Government’s own target.

Crystal Doors has already cut its carbon footprint from direct operations and electricity use by a third since 2015 by investing in cutting-edge energy efficient technology, an electric car and a 245kW solar panel system covering its entire rooftop.

The factory is now one of only around 500 commercial buildings in the country to achieve an Energy Performance Certificate (EPC) rating of A+. Most of this has been achieved without affecting cashflow.

Mr Hagan explained: “There’s a perception that doing the right thing is expensive. That’s simply not true. The finance repayments on our investments are covered by the energy savings we make – meaning we are reducing our environmental impact with no impact on our cashflow. If a small business like ours can do it, everyone can.”

He said there’s never been a better time for businesses to take action, despite the economic difficulties caused by Covid-19.

“The disruption we’re seeing at the moment will be nothing compared to climate change unless we move faster on reducing emissions,” he said.

“Thankfully, Covid-19 has shown us that we’re willing to come together and take drastic action to protect each other in a moment of crisis. We have an opportunity now to not only build back better, but build back greener. We stand ready to play our part in this green recovery and help other organisations do the same.”