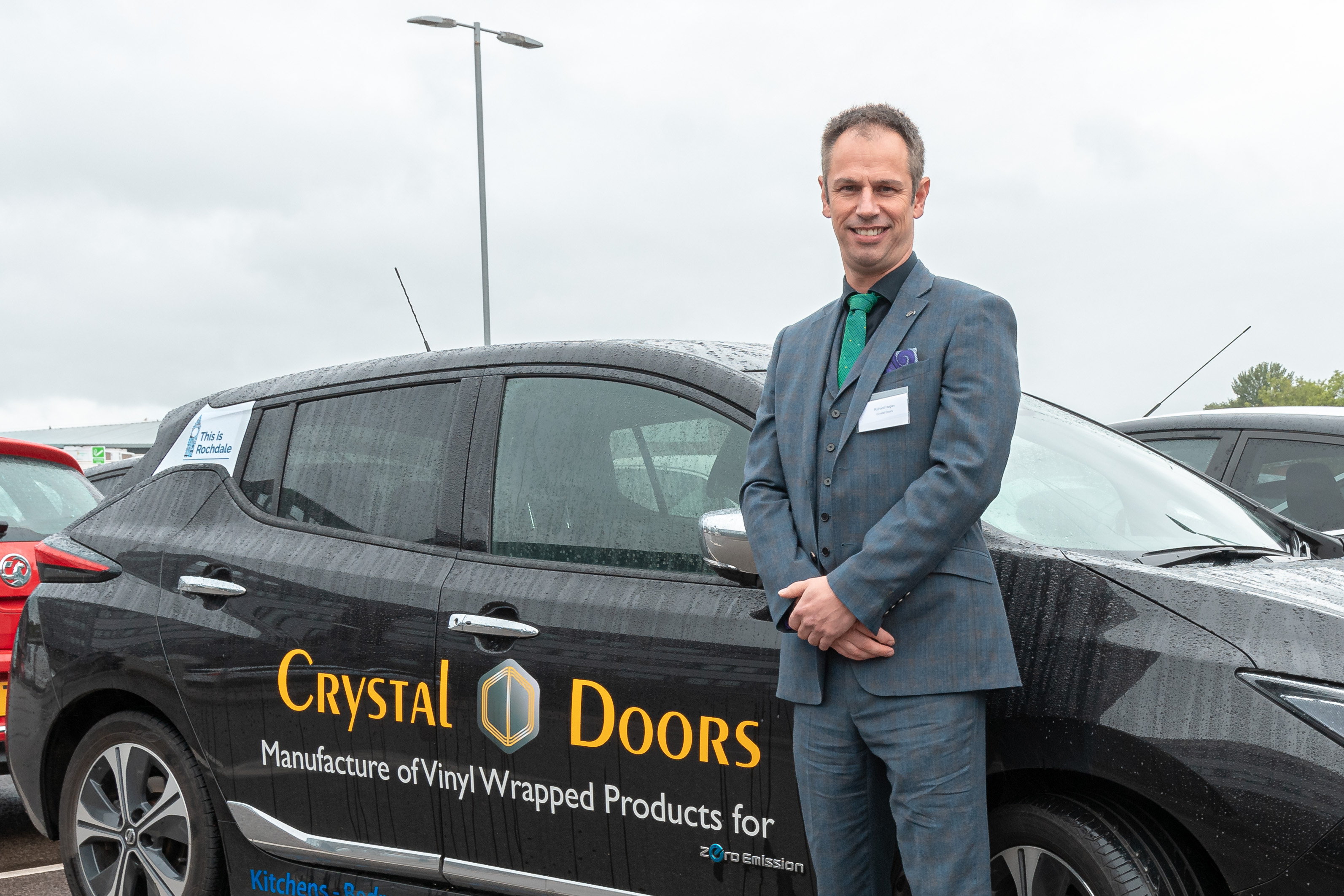 Is this the UK’s Greenest Manufacturer ?

Richard Hagan is the managing director of Rochdale-based Crystal Doors, which is the leading manufacturer of vinyl-wrapped doors.

Hagan has already spent more than £1m on energy-saving technology; installed solar panels on his factory roof; bought an electric car; and announced plans to be carbon neutral by 2030 – 20 years ahead of the UK’s own target and eight years ahead of Greater Manchester’s – but he doesn’t think it goes far enough.

Now he’s banned himself flying to trade shows or visiting suppliers around the world to reduce pollution and believes frequent fliers should be hit with a carbon tax.

Hagan said: “Businesspeople have to lead and can’t leave the job of protecting the environment to the next generation. Rather than fly to a trade show I’d rather be a virtual visitor by putting on a VR headset and seeing it that way.”

The manufacturer is also planning to plant 11,000 trees as he bids to become carbon-neutral in the next 11 years.

Crystal Doors employs 30 people and has a turnover of £2m. Hagan took over the business in 1994 but says his ‘light bulb’ moment came during a visit to Siemens’ site in Congleton five years ago.

“Siemens are a multinational company but they were totally committed to making ambitious cost and efficiency savings over the next four years,” he recalled. “I thought if a big company like Siemens can do that then so can I.

“We don’t have a big pot of money so the key for me is how long it takes the investment to pay for itself. Working with Manchester’s Business Growth Hub I got an energy audit done of our factory in Rochdale and it identified 16 energy-saving measures I could take. I haven’t looked back since.”

The first steps he took were to fix leaks in the compressed air system and install LED lighting, making annual net savings of £2,000 and £1,000 respectively.
Major investments followed including a £500,000 renewable heating centre, which includes the use of biomass and solar energy. This cut the amount of waste going to landfill as 98 per cent of all waste is now recycled. As a result he now receives annual grants of up to £80,000 from the Government.

His biggest cost to date has been £580,000 on a dust extractor, which he says has transformed the efficiency of his business.

“As a manufacturer a dust extractor is essential,” he said. “We decided to invest in a cutting edge one and it has made us more efficient and reduced our energy bills significantly.
“I want to be carbon neutral by 2030 and as part of that I want to plant 11,000 trees. I grew up on a farm and I think the north needs more forests.”

Hagan is also a big advocate of Industry 4.0, which has revolutionised the manufacturing process through the latest technology. Combined with the energy-saving measures he’s introduced the company’s energy bill is now a quarter of what it was seven years ago.
The father-of-two has also made changes at home, including buying a Nissan Leaf car so he no longer needs to buy petrol, and cutting back on foreign holidays.
“I’m not saying people shouldn’t fly but if you fly more than twice a year then I think you should pay a carbon tax,” he said.

“I’m a Rochdale Business Ambassador and if we want to safeguard the environment for our children and our children’s children then we all need to do more.”

Todd Holden, director for Low Carbon at The Growth Company, said: “While it’s impossible to say who the greenest entrepreneur is of the city region, Richard has to be up there. He not only recognised the opportunity of becoming energy efficient, he’s grabbed it with both hands, realising the economic and environmental benefits that go with it.

“Crystal Doors is an SME with 30 employees and the whole company has bought into it. He’s reduced his energy spend and is well on course to becoming carbon neutral.

“There’s nothing to stop other companies following suit. Not only do we have a team of advisors ready to go into businesses to carry out a free energy and resource efficiency audits but we can support you in implementing the recommendations, with our grants programme. Now is the time, can you afford not to?”

To find out how green growth hub can help you to become green, please visit: https://www.green-growth.org.uk/