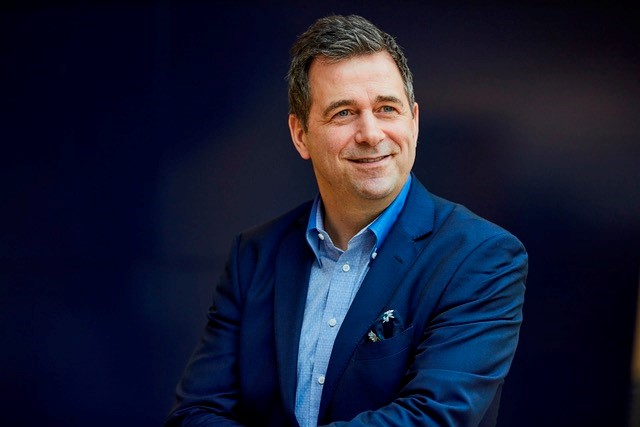 The former chief executive of Siemens UK has hailed the planned Advanced Machinery and Productivity Institute (AMPI) in Rochdale as an opportunity for UK manufacturers to sell machines around the world.

Juergen Maier, who is also the vice chair of the Northern Powerhouse Partnership, praised the entrepreneurial approach of Rochdale businesses like Crystal Doors and PTG Holroyd but called on the Government to deliver on it levelling up pledge.

The Kingsway Business Park-based AMPI has been described as a ‘game-changer’ and is set to create more than 1,000 jobs across the region.

Maier said alongside Northern Gateway, which crosses the boundary between Rochdale and Bury, AMPI would put the North on the map.

“AMPI is massively important,” he said. “When you’re developing a new industrial revolution the real value is not only the new products that you’re making but the machines that make it. It’s inevitable that these products will eventually be made elsewhere in the world but you can export all the machinery to these places.”

He also highlighted the importance of the Northern Gateway to levelling up the economy.

“As we know, levelling up can’t just be in cities, it needs to be in all the towns around,” he said. “Now is the time to spread that prosperity into the towns and the way to do that is to take some of the technology ideas and start-up ideas that emerge in our universities -  and that could be advanced materials -  and scale this up.

“You’re manufacturing for the world and that sort of scaled up manufacturing we want to do in the Northern Gateway and that’s why AMPI has been developed.

“When you scale up that sort of manufacturing you need machinery, you need automation, you need robotics and that’s where AMPI comes in.”

Mr Maier said it was ‘now or never’ when it came to the Government’s levelling up promise.

“We’ve been talking about it for an incredibly long time,” he said. “I was very pleased to be involved in the original set up of the Northern Powerhouse Partnership, which was five years ago but the conversation was going for a full decade before that.

“Some good things are happening in Greater Manchester.  We have in that time invested in great innovation ecosystems around advanced materials, advanced manufacturing, health innovation, cyber security (and) now is the time to really scale all of that up.”

The leading UK industrialist praised the ambitions of Rochdale’s businesses.

“I’ve been up in Rochdale quite a lot recently,” he said. “I visited Crystal Doors and you have (PTG) Holroyd making advanced machinery.

“What you get is a real entrepreneurial sense and a real global outlook on what Rochdale’s place can be in the world. There’s a huge level of ambition.

“What we want to do with AMPI, and what’s happening in Greater Manchester, is provide a few levers that can help more companies like Crystal Doors and Holroyd to establish themselves (and) become great global companies while operating in Rochdale.”

Earlier this year Hopwood Hall College unveiled plans for a £6.1m extension to its Technology Centre in Rochdale as it prepares to start teaching T-Level qualifications, especially in advanced manufacturing and advanced construction.

“It’s fantastic that we’ve got a major college in Rochdale absolutely helping prepare the future generations with T-Levels that are providing the skills for these future industries.”
Mr Maier said Rochdale had the opportunity to form part of an ‘innovation supercluster’.

“Everything we’re talking about with AMPI and the Northern Gateway will be part of Greater Manchester and the North West’s innovation supercluster based on advanced materials and advanced machinery production,” he said.

“Developing these innovation superclusters will turbo charge these high innovative, high technology and high value economy. “We’ve heard the Government talking about a high wage and high skilled economy and I’ve long argued that the best way to create that is to create industries that are highly innovative and productive. It is these businesses that can pay people the highest wages.

“The more you can grow your innovation sectors like advanced machinery and creative industries using AR and VR, the higher salaries you can pay people.” Mr Maier highlighted the importance of apprenticeships and said they shouldn’t be seen as being inferior to going to university.

“Nations like Germany are very clear that at least half the population will want to pursue a more vocational education route in things like engineering while the other half of your population wants to go down a university and academic route,” he said.

“What we still haven’t got right in the UK is most families and most mentors of younger people will prefer their children, nieces, nephews etc to go down an academic route because that’s seen as the better route for social acceptance and success in life.

“That’s what we’ve got to change. Both routes are different and suit different types of people. Through both routes you can create success for you and your families.”