Budding archaeologists invited to dig deep into Rochdale’s past 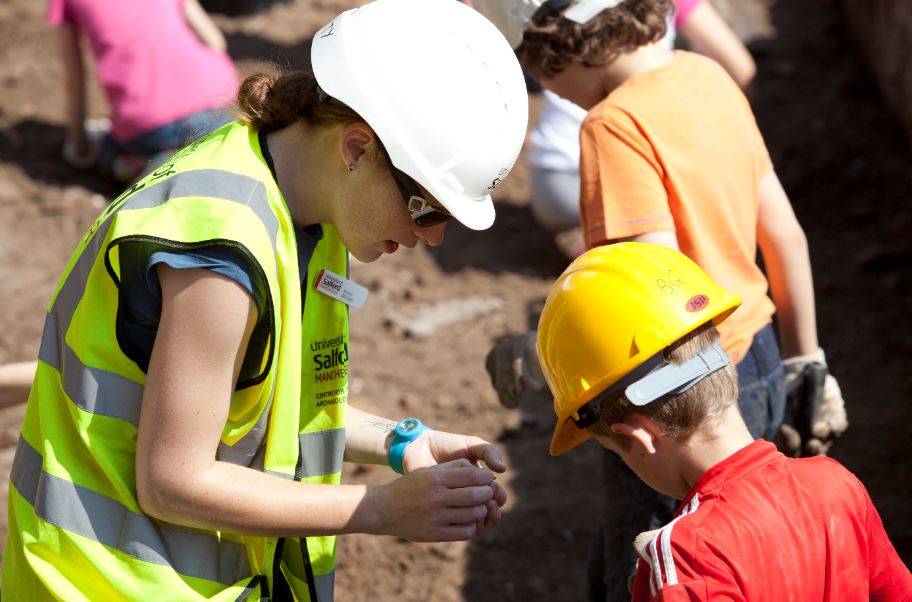 A major project to uncover possible 17th-century remains underneath Town Hall Square gets underway next month and the public are invited to get involved.

Led by archaeologists from the University of Salford, the ‘big dig’ will give local history enthusiasts the chance to get their hands dirty and find out more about what’s underneath the ground in the area which was once the beating heart of the borough’s woollen and, later, cotton trades.

The dig was set up after site surveys, carried out by the Salford team as part of the wider restoration of Rochdale Town Hall, determined that there could be some fascinating finds below the ground. The event is supported by contractors HH Smith and Sons. It was also made possible thanks to funding from the National Lottery Heritage Fund, as part of their wider support for the project.

Ian Miller, heritage management director at the Greater Manchester Archaeological Advisory Service, based at the University of Salford, said: “This area has an incredibly rich history. It would have been a key part of the trading route over the Pennines and it’s likely that we’ll find foundations of homes belonging to the wool merchants of the 17th century. We also have strong evidence that this area was a hive of activity as far back as the 10th century. If we’re going to find any evidence of activity going this far back in time anywhere in Greater Manchester, it’s likely to be at this site.

“From the historic bridge nearby, which transported cotton and wool, to the town hall itself, which was constructed using the wealth created by the textiles boom, all this history weaves together beautifully and is part of the bigger story of Rochdale and its people. We’re really looking forward to working with Rochdale residents to uncover another part of it.”

Residents of all ages will be invited to help archaeologists dig out the site, process, catalogue and clean the finds, as well as finding out more about the history of the area in a special two-week ‘big dig’.

Digs will be taking place each weekday from Wednesday 14 July to Friday 30th July, with two groups of 20 able to take part each day, from 9am until 4pm. A dig will also be taking place on Saturday 24 July.

Talks and site tours will also be taking place at 12 noon for an hour each weekday for people who want to hear first- hand from the archaeologists about finds on site and what they tell us about the history of the area. These will culminate in a final talk and tour of the site at the end of the dig on Saturday 31 July at 11am.

History buffs can also go behind the scenes at the Touchstones Museum stores to see the treasures in the archives, including the Egyptology collection, with tours taking place on selected days.

All the events are free of charge, but must be booked online in advance. Children are particularly welcome, but must be accompanied by an adult.

Councillor John Blundell, cabinet member for economy and communications at Rochdale Borough Council, said: “This will be a wonderful opportunity for local residents, from children to older people, to really get stuck in and have a go at being archaeologists for the day. These experts will take them on a journey and show them how the smallest of objects can tell us big stories about our borough and its fascinating past.

“The town hall restoration is about giving this wonderful building back to the people of Rochdale and we will be bringing them on this journey with us through events like this, which will also be open to local schools. It’s going to be great fun finding out what’s beneath the ground and I’m sure it will be a popular event.”

All finds will be carefully photographed, catalogued and recorded before being covered over, so they can be preserved in situ for future generations.

Residents can get more detail about the event by clicking here . Alternatively, they can call: 01706 924797.