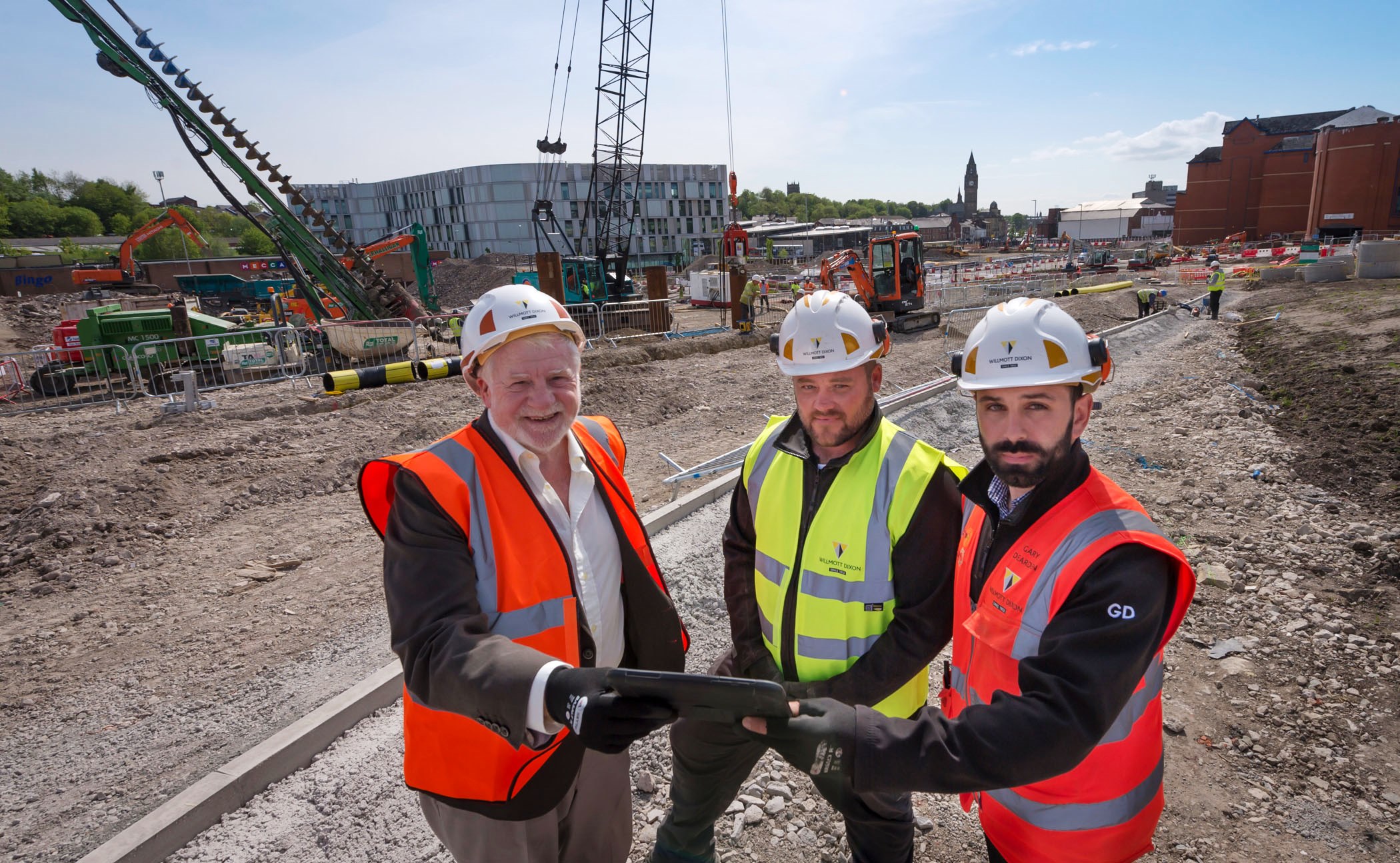 Two ex-members of the armed forces are forging a new career helping to build the new Rochdale after landing jobs at Willmott Dixon, the local contractor building the £80m Rochdale Riverside retail and leisure development.

Carl Herbert and Gary Dearden are both Rochdale born and bred, but their time in the military took them as far afield as Afghanistan, Iraq and Northern Ireland, before they decided to come home and start a new career.

And the dynamic pair decided to put the many skills they picked up in the military to use helping to construct the new development, which will feature 24 shops and restaurants, alongside a six screen cinema. It comes a few weeks after Willmott Dixon became one of only six companies to win a Queen’s Award for Enterprise in the category of Promoting Opportunity for its work promoting social mobility in society.

Gary (32) from Norden, who is trainee site manager at Rochdale Riverside, was medically discharged from the Royal Marines last year after 15 years’ service following a knee injury.

He said: “It was getting more difficult to be in the marines with my injury, but when I left I wanted to get straight back into work. I didn’t want to be sitting around, so I got in touch with Willmott Dixon through a military charity. They started me on an induction at a site in Manchester and I took to it straight away. I like doing something really big like this in my hometown, because it will make a massive difference to Rochdale. The town centre has changed a lot since I left and it will give me a huge sense of achievement to walk past it when it’s finished and know I was there from the beginning.”

Carl Herbert (32) from Middleton, served in the second battalion of the Royal Regiment of Fusiliers, but left in 2008 after deciding he wanted a change.

Carl, who is the gate supervisor on site, said: “It can be quite difficult when you leave the army because everything’s very structured and lots of things are done for you and then suddenly you move on and you’re on your own, with no support. I went into different jobs after I left the army, but they were quite mundane and I wasn’t settled.

“Eventually somebody put me in touch with a military charity and this opportunity came up. I really like the role. No two days are the same and there are lots of opportunities for progression, so I’m really motivated. It’s great doing a project in Rochdale. It’s creating a real buzz and people tend to ask me questions when they walk by.”

And the two recruits are busy, with site excavation well under way and work to create the foundations set to start later this month. The steel frame for the cinema, at the Baillie Street end of the site, is expected to start going up in July.

The recruitment is part of contractor Willmott Dixon’s commitment to employ and spend locally wherever possible. Rochdale-based civil engineers, Hovingtons, who are based less than a mile from the town centre, are already working on site after securing a £6m contact to do the groundwork.

Anthony Dillon, managing director for Willmott Dixon in the North, based in Oldham, says, “It’s great to welcome Carl and Gary to the team. They have already learnt some fine skills in the army that can be put good to good use working for Willmott Dixon and we are looking forward to helping them develop further so they can enjoy a rewarding career in the construction industry.”

Councillor Allen Brett, leader of Rochdale Borough Council, said: “Rochdale Riverside is a major part of the £250m regeneration of Rochdale which is changing the face of the town centre, and we want our residents to be part of it.

“It’s great to see that this fantastic scheme is already benefitting the borough by bringing jobs for our residents and contracts for our local businesses. And this is only the start, as we expect Rochdale Riverside to generate £17m a year for our local economy and create 1,000 new jobs once it opens in summer 2020.”

Rochdale Riverside is being delivered by Genr8 and Kajima in partnership with Rochdale Borough Council.