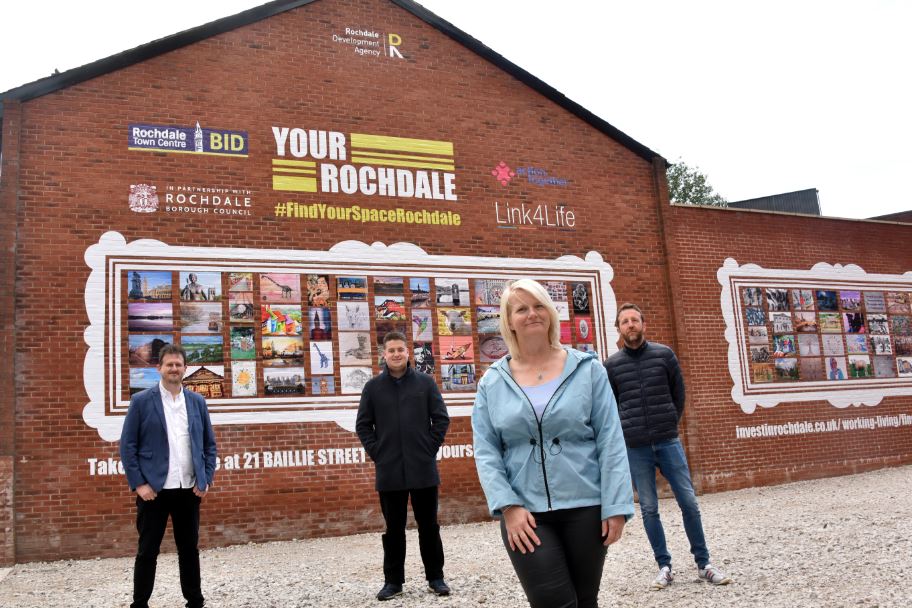 A giant artwork celebrating the best bits of Rochdale has officially been opened.

21 Baillie Street has been transformed by 91 images depicting what Rochdale means to the artists as part of the ‘Find Your Space’ art project. Some of the artwork has come from as far afield as America in an initiative aimed at boosting town centre footfall.

Rochdale Hornets fans Abigail Yarwood is just six and one of the youngest people to be included for her drawing of a rugby ball with a girl playing in a Hornets kit. Abigail said: “I am very excited to be part of it because I want to be an artist when I grow up so I love that everyone will be able to see my art. I like going to the rugby with my Grandad Tom. He lives in Rochdale but I can’t see him because of coronavirus so I hope it will make him think of me and smile every time he goes past it.”

Retired teacher Judith Hunt left Rochdale 40 years ago but still thinks of it as home – and is delighted her submission will be displayed. She submitted a black and white photograph of ‘The Walk’ in Rochdale and said: “My memories of growing up in Rochdale are always with me…. how proud and thrilled I am to be part of the wonderful Baillie Street art initiative.”

New York artist and art teacher Janae Sunshine Ramirez’s submission of her Rochdale husband has also been included Marcus, 48, a musician and video engineer, was born and raised in Rochdale, and has been captured in Janae’s entry abseiling down Rochdale Town Hall during the Feel Good Festival in 2017.

Janae said: “My husband was born and raised in Rochdale and his mother, Margaret, still lives in the house he grew up in. Being part of the Baillie Street art initiative means that I can be connected to my mother-in-law in these strange times.”

Steve Kuncewicz is a non-executive director of the Rochdale Development Agency and has overseen the project in his role as chairman of the marketing and social media committee. He said: “It’s absolutely spectacular. It just goes to show that Rochdale means so much to so many people.  We have so much to be proud of in Rochdale and I’ve been knocked for six by the standard of the work. “Just looking at it reminds you of the emotional connection people have with Rochdale in a tangible form. The images are bright and visual and illustrate Rochdale’s shared values.” Kuncewicz said the project would attract people into the town centre – albeit in a socially distanced world. “We’re very mindful of the ongoing restrictions but this project gives people something to look forward to and celebrate,” he said.

He was joined at the official unveiling by Councillor John Blundell, cabinet member for regeneration, business, skills and employment. “The 91 mosaics come from all ages and all abilities,” he said. ”Not all of the artists live in Rochdale but a little piece of Rochdale lives in them and you can see it in their art.” Organisers thought they’d only have room to display 88 mosaics on the side of 21 Baillie Street but they managed to showcase a total of 91.

Kerry Hargreaves, Practice and Marketing Manager at Molesworths, Bright-Clegg solicitors and owner of Kerry Hargreaves Photography submitted the photo below. ” For me, Rochdale is all about community, a community that supports one other.  There is one person who is the glue at most community gatherings; Alan Calow. Alan is Rochhdale’s finest Toastmaster, he spends more time at the Town Hall and in and about Rochdale than he does in his own home!  Alan is a great Ambassador for Rochdale and anyone who has ever met him loves him totally”. 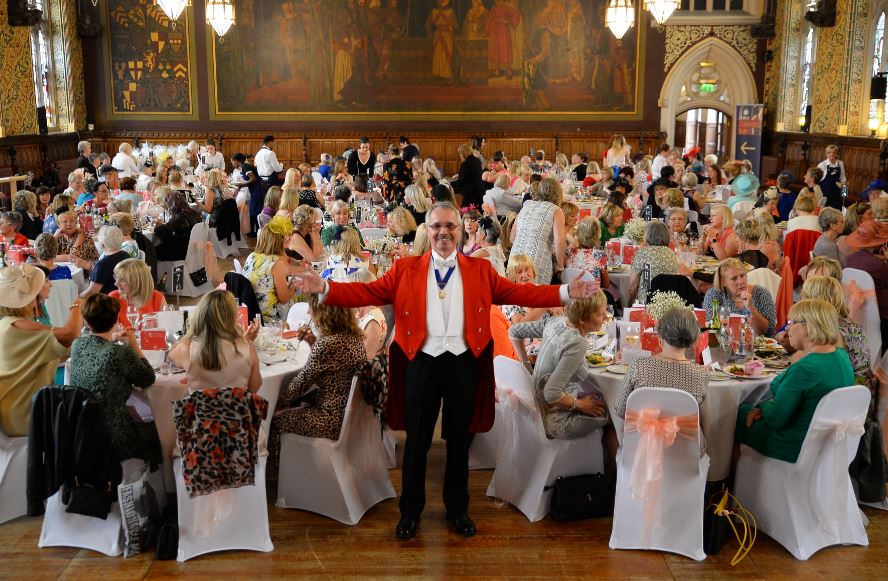 Councillor Blundell said there was a serious point to the ‘Find Your Space’ art project too as they wanted to showcase the £250m revamped town centre to more people. “21 Baillie Street is located in the town centre and we thought the best way to utilise it was to turn over the side of the building into a giant artwork of 91 mosaics that sum of some of the things that are great about Rochdale,” he said. “As a local authority we’re very mindful of the restrictions around Covid-19 and this is just one of a number of great initiatives to boost Rochdale town centre.”

To encourage people to support local high streets, Rochdale town centre is joining with over 100 independent high streets across the UK, to put on very special £5 offers across two weeks in October, in the Totally Locally Fiver Fest. Fiver Fest is based around the now famous Totally Locally £5 message: If every adult in Rochdale spent just £5 per week in their local independent shops and businesses, it would mean £21m per year going directly into our local economy.

Coffee-lovers can also take part in the Rochdale Coffee Trail by grabbing a card at any of the nine coffee shops that are featured on the trail.