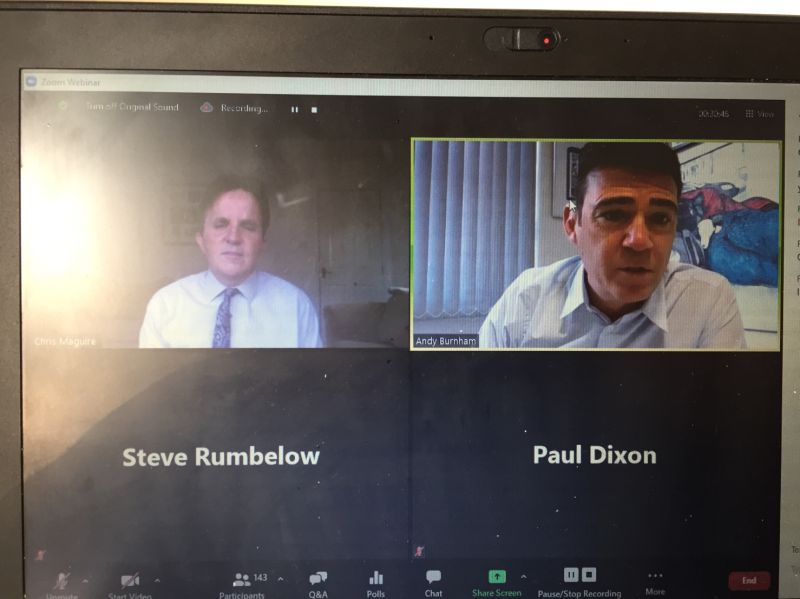 The latest Rochdale Ambassador’s webinar featured a very special guest. Andy Burnham who is, of course, the mayor of Greater Manchester. He is also at the centre of a political storm, challenging the Government over its plans to put the region into a Tier 3 lockdown without - as he sees it - adequate financial support for business.

Tier 3 has now been imposed, but before that happened Andy made it clear to a virtual audience of Rochdale borough’s business leaders that this would be a top down decision without local political support. “We all accept that Covid is a tough balance,” he said. “But there is pressure on us to go into Tier 3 with nowhere near enough financial support for those affected.”

He laid out the reasons for Greater Manchester’s intransigence. The Government had offered only limited support for businesses forced to close and their employees, and nothing for the hospitality supply chain or other organisations that would suffer as economic activity slowed to a crawl. And as he reminded the audience, the Government’s own chief medical officer had questioned the effectiveness of Tier 3 restrictions on their own.

“We need to help people now so that, when a vaccine is found, the economy can roar back quickly,” he said.

Whatever you think about the mayor’s stance over Covid and Tier 3, it became clear during the webinar that he is a passionate and eloquent promoter of the region and its businesses. Andy said that positives could come out of Covid for boroughs like Rochdale, because it would usher in a new era of house building and green construction, and accelerate the resurgence of local high streets.

His office was working to promote these outcomes, he said, in consultation with local councils. But they would likely fly under the radar in 2020, with all eyes turned to the pandemic. “What we do know is that when people can eventually turn their thoughts to recovery we won’t be starting from a blank page - we’ll have plans in place. We want Greater Manchester to be first out of the traps when recovery happens,” he said.

Those plans include an acceleration in the progress towards becoming a zero carbon region, which Andy said had a huge potential to boost jobs and investment in Greater Manchester. He argued that, alongside digitisation, decarbonisation would be a major global policy focus and economic stimulus for decades to come. “Which means that if we can get to zero carbon quicker and better than other places - and that’s the aim - we can reap the benefits of early adoption,” said Andy. “The climate debate is a business opportunity.”

Greater Manchester’s post-Covid recovery would also be spurred by the Greater Manchester Spatial Framework (GMSF), the strategic plan for land use in the region over the next decade that includes housing, employment and infrastructure schemes. The new draft of the GMSF was “ready to go”, said Andy, and would aim to narrow the economic gap between the south and north of the Manchester city region.

The GMSF has particular significance for Rochdale borough, with the Northern Gateway, an area which straddles the town’s outskirts, “one of the UK’s prime development sites.” All told, the GMSF could benefit the borough to the tune of 10,500 new homes and 720,000 square metres of new employment space, according to an earlier draft of the proposals.

The mayor’s vision for the Northern Gateway is an ambitious one. This should be an area dedicated to high tech green manufacturing, he argued. The fact that the University of Manchester had expressed interest in bringing a research and development centre to the area was highly encouraging, he added.

Andy also praised Rochdale’s modern vision, and in particular the work that is being done rethinking the town centre. As well as the creation of new local jobs thanks to schemes like the Northern Gateway, he believes Rochdale will benefit from providing affordable housing, a great quality of life and efficient connectivity for those who work in Manchester city centre but don’t want to live there. “This is a really good vision for the town but it’s not one I’m imposing,” Andy said. “This is Rochdale’s vision and my role is to enable it, and get people buying into it.”

Needless to say, there is much work to do to meet these ambitions, and Andy admitted that one of his main focuses at the moment - beyond Covid - was getting an integrated public transport for the region that matched London’s coordinated system. “There’s a lot of talk of “levelling up”, but we won’t be levelled up until a single bus ticket in Rochdale costs the same as it does in London,” he said. “We need a public transport system that helps, not hinders. At the moment ours is fragmented and overpriced.”

Andy finished on a hopeful note, before leaving for more in-depth negotiations with central Government about infection rates, Tier 3 and financial support. GMSP would ensure Rochdale borough was prioritised in terms of infrastructure, he said. The town centre was getting better all the time. “These are things to build on, and Rochdale has real ambition. Let’s get through this current period of turbulence and open up to a more positive 2021.”

The full video can be watched here